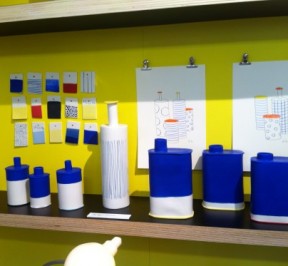 Masion & Objet or Home & Object as I like to call it

Before starting artysmarty, I didn’t really have much of an idea about how the old buying and selling stuff to retailers went.  I’d wander into any old shop without a though of how a product went from a studio or factory into the place where I purchased it.  Initially I thought the path from A to B would be quite boring (I was just thinking trucks, loading and bubble wrap) on second inspection, I’ve found it to be the opposite.  Some of the shows out there for retailers to visit and buy products for their stores are pretty far out – case in point Masion & Objet in Paris.  Fair enough, most of Paris is pretty cool, so it’s not a massive surprise that they do a good one so I thought I’d show a few images from the show which demonstrate trends for this year and give a bit of a general flavour.

So above there, we have a couple of stands with a very masculine, anthropology theme, stuffed animals, bell jars, pinned insects and graphic wallpaper.  I actually love this look and I saw it in quite a few displays – I know it’s a bit bad all those stuffed animals, actually, it’s just bad, I hope they’re fake or dead 100 years when it was acceptable to stuff those mighty creatures.  There is also a very strong craft aesthetic going on too – while there was a limited number of maker/sellers in comparison to all of the commercial guys, was super impressive the selection that was there – and very strong displays.

Just in terms of what the big commercial brands are doing – check out the image above.  What do you think this company was selling?  I’ve kind of given it way but the whole room was a massive video projection with about 10 items that were for sale.  Totally conceptual and very memorable – more about this experience way of selling stuff.  Okay, there is a harder one below…what do you think they were selling?  And it’s not chicken skewers.

Well, it’s coming up to Mother’s Day – that’s 15th March – and I was thinking to do a gift list of lovely things to buy your mum.  And then I thought ‘Why do the work when someone else already has!’  Now, these are all really great ideas, otherwise I wouldn’t be recycling them, but they’re not mine so I must give credit to the Design & Craft Council of Ireland.   They put together a really nice pull out guide at Christmas of nice stuff and if you were like me I was so busy, I didn’t really get a chance to look at the time.  So here you go, admittedly second time around, a selection of nice stuff to buy your mum on Mother’s Day!   We have a beautiful foxy and crow necklace from Geraldine at Saba, cute doggy brooch from Alan Ardiff and oh, what a coincidence, a yellow cube necklace from myself.  Well, how did THAT get in here?!

More info about stockists and all that at www.giveirishcraft.ie 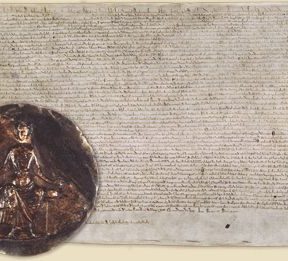 We love a challenge here at artysmarty studios but when the British Library approach us with an idea to make some bespoke pieces for their upcoming Magna Carta exhibition, I have to admit I was a bit stumped at first – how to translate essentially a paper document into a pretty 3D piece that people wear?  The feature image for this post is a picture of the document along with the ring seal that was used. The British Library have THE actual Magna Carta that King John signed in 1215 – yep, 1215 as in 800 years ago – and they’re going to have an exhibition to show them off to the public.  As you can see though, the source material was pretty dry!  Sorry BL!

After the initial mind blank, I started to collect some visual inspiration – I’ve added a few collages here to give you the idea, some are original documents from around 1215 and some are directly from current fashion houses; there is a great one from Dolce & Gabbana (who I am sure would sue me for using their image without permission if I was in any way interesting to them!).

Anyway got the mood board happening and then started getting in touch with the British Library team with ideas, tweaked them a bit, well went back to the drawing board at one stage and then decided on these prototypes;

So we have a reference to King John’s crown (and status), ditto Queen Isabel (the one on the left) and then a homage to the Fleu de Lys (centre) – also a common symbol at the time.  We made a wax seal inspired ring too – for sealing your very own legal documents!  The final pieces have been sent off for photography before the start of the exhibition.  If you’re keen to have a look at the finished product we’ll be putting them up on our facebook page for your perusal once the exhibition has opened.