Archive for May 2014 | Monthly archive page 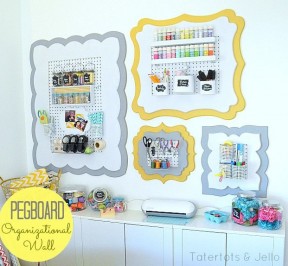 Yes, I realise that it seems a bit self indulgent to write a whole post about pegboard but it IS the material of the season.  Not being one to jump on the bandwagon or anything, but I have developed a bit of a love affair with it and applied to the wonderous displays of artysmarty.

So if I need to convince you of the qualities scroll down…..

Yeah, yeah, I know we shouldn’t be swayed by the way things look but that’s the kind of vacuous person I am .  Check out the decal frames around this one.  I think actually it’s the scale in this arrangement which is the winner, 4 small ones looks a bit more polished than a big chunk of the stuff hung on the wall.

You can literally stick anything into the holes which are perfectly in line with each other.  You won’t have to measure or use a set square to make sure things you’re hanging are straight or even.  If you don’t have OCD then this probably isn’t an issue for you anyway but if you’re driven to despair but wonky lines this is your only man.  Yeah, so you can use a clip, hook, string, you can even drill into it and add magnetic panels to stick your scissors to.  I personally like the custom made pegboard hooks, but that’s the kind of pro I am.

Can be used anywhere.  Kitchen = perfect, craft area = awesome, man-cave = functional (we are a non=gender discriminator),  shed = good for large tool.  That’s probably about it but how many rooms do you have in your house?

Here are lots of little bits of inspirational application of the humble pegboard – they’re probably too small the see very close up but check out Pinterest, it’s full of the stuff!

My own personal favourite!  Arty! 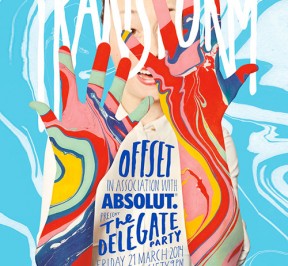 We’re going back a month or two for this one but I was at Offset recently, held 21st-23rd of March and I wanted to do a quick ‘those who rocked’ note about some of the speakers.  Just as a bit of a background, Offset is a creative industry conference which has been running for about 4 years,  (I think it was first held in the Sugar Club on Leeson Street), and has exploded out to roughly two and a half thousand attendees in the Bord Gais Energy Theatre down in the docklands.  Oh, and one other key thing, it’s amazing.  This is the second year I’ve headed down for it and I have to say it totally lives up to the hype.  Three full days of creative industry speakers, some local, some international and a few breakaway stages for 1:1 interviews and other bits and pieces.

These peeps were my own personal faves from this year (and all the delegates are great, I guess there are some that are more relevant than others) and I just wanted to have a record of them and recommend them to yourselves.  You can go to the Offset website and watch each of the speakers back which I would highly recommend if you’re too povo to attend in person.  This years aren’t up yet but you can get 2013s speakers, I’ll stick a recommendation for a few from last year to watch back.

Mike Perry: Gave a super interesting hour about getting his own personal vision of a multi purpose art space in Brooklyn but I guess he’s primarily an illustrator.  He talked about using KickStarter to fund his project initially, (which sounds like the equivalent of Fund It here) and fundraising generally, and how fun it was, how hard it was, how difficult it was to close the project.  His ethos: ‘Keep Wondering – Keep Wandering’.

Really amazing speaker who is a partner at the design agency Sagmeister & Walsh who do brand identities for the Tate Museums and any other amazing clients you could think of.  I guess the main things that she touch on were fear, feeling fear or risk in your career and pushing on regardless.  She illustrated this by showing the announcements they sent round to clients announcing her partnership with Stefan Sagmeister where they were pictured naked in the office.  Yikes, that’s really trying to ignore feelings of discomfort.  She also talked about making stuff rather than relying on photoshop or technology to create ad campaigns.  I liked the take on actually doing stuff with your hands instead of relying on software to create.  Watch it back for yourself, it’s all in the telling!

Jon Burgerman was really funny and self-effacing, I thought he was great (although I do wonder about his name…stage name or real?).  I suppose he’s primarily an illustrator too, like Mike Perry.  You’ll have to watch this when it’s listed.  Basic ethos:  Define your own world!

And as promised one from last year which you can watch now.  Ji Lee, he was great! 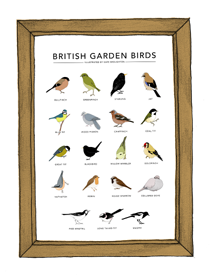 We closed the artysmarty office recently to have a big day out to the British Craft Trade Fair  at the Great Yorkshire Showground in North Yorkshire.  Are you mad? I hear you ask, it looks like you’re lost in a field in Meath!  Funny, that’s kind of what I was thinking too as I wandered up the path to the entrance.  But we did see an eagle, which unfortunately I didn’t manage to get a photo of.  (Actually, later on in the day our lovely driver shattered the dream a bit, I think it was actually a skate not an eagle).

So who did we see and love?  Not in any particular order;

Okay, one last one;

Elizabeth Terzza: Delicately made modern pieces, nature themes or ‘botanical treasures’  as the lady says herself.

Was a great old day out, they had a lovely restaurant down the road too and the BCTF even put on a driver to drop people back to the airport.  In case you’d like to visit yourself next year, dates are 6-8th April 2014 and the website is; 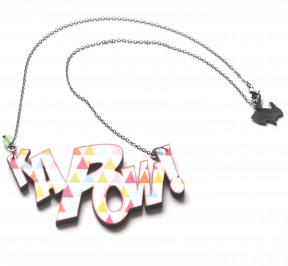 Comics Unmasked at the British Library: aka Kapow!

Every now and again some cool commission work will come your way, and as it happens one came my way, and has been one of my favorites.  The British Library have produced an exhibition exploring comics as a political medium,  Comics Unmasked:  Art and Anarchy in the UK, and asked yours truly to design some jewellery pieces to  go with it.

Hhhmmm I though, I love comics, the dotty printing,the Lichtenstein pop art interpretation of them, the crazy colour, what to do, what to do.  I guess the first considerations when making some specialized pieces is to try and get the essence of the subject matter distilled into one or two ideas and then apply them across a few different mediums.  For me, comics are a lot about action, you know, baddies getting a punch in the nose, mostly violent interaction, come to think of it, but without anyone actually getting hur.  So I thought the movement from comics should be on the list, what are they doing to each other, lots of zapping and kapowing I thought.  Aesthetically, the colour and pattern are obviously a big element too, but instead of just transposing the traditional dots and crumpled paper look I’d go for something updated to give it a bit of a new spin.  Kind of put the artysmarty filter over it.

And then, what do you do when you love something?  Set it free.  In this case lovingly give it to the British Library as their own (which it is, all accounts have been finalised!) and package it so.  Tying it all together with specialized notes and logos on the boxes and cards gives the customer a lasting warm glow after attending the exhibition.  Noice.

One for the boxes…..

a bit more info for the brooch cards

Heading to London anytime soon?  Exhibition begins today, 2nd May and runs till the 19th August 2014